‘Acid and Alkaline’ a story by Marmoset29

“As you’re aware, this week is… Science Week.” Miss Hughs paused waiting for a cheer or round of applause. The hall fell silent apart from the one ‘hurray!’ that echoed throughout the over-crowded room. Cat. As heads turned towards her, the brown-haired girl fell quiet and reddened. “Uhum, Reception will be …” the clueless, over-positive headteacher continued in her sing-song voice, unaware of the fact that most of the upper-school were dozing off. Of course, though, that didn’t include Cat…

“Uuh!” sighed Ashley, “It’s almost like she’s got something against us.
“Well she hates you!” Nikki added.
“True but Cat’s her pet.” Ashley debated. Miss Hughs had set each class a ‘fun’ science experiment and for most years it was. From testing ‘zero-gravity space boots’ to building rockets, it looked like most classes would have a ‘memorable experience’. Everyone except Y6, who were doing soil samples.

“You know who she reminds me of?” Jess interrupted the silence.
“Who?” the other girls said in unison.
“I would say guess but…”
“She’s from Harry Potter, isn’t she?” The threesome were BFFs and had known each other since pre-school but the only Harry-Potter-fan between them was by far Jess. “Yup. She’s Dolores Umbridge.” Jess explained.
“Oh, I heard of her – she stepped in as headmaster, always wore pink and tried to be positive but everyone hated her ’cause she was just well, cruel.” Ashley half-guessed. Whether she was right or wrong didn’t matter as they immediately burst into hysterical laughter.

“You’re six minutes late!” Mr. Daly greeted the girls.
“They’re six minutes, seventeen seconds and three milliseconds late to be precise,” Cat butted in. At this comment, even Mr. Daly winced: Ashley’s reaction was different each time. Sometimes, she would just tell her classmate to shut up; other times, it would result in more than one visit to the nurse. Today, however, the popular yet feared girl just held her tongue. “Ashley, you’re with Cat’s group and you two are with Nikki,” the teacher instructed, pointing to Sam and Jess.”

Reluctantly, Ashley joined the group, flopping down on the table as far away from the others as possible. In the back of her mind, she could hear her group talking nerd talk. None of it made sense to her: it was just soil this, soil that or ‘it’s acid’. At that comment, she perked up: if she could find an alkaline soil and mix it with the acid, this lesson could become fun. At least, she could vaguely remember her dad lecturing her about the ‘dangerous’ effects. “So, any alkaline soils yet…?” she enquired, a grin on her face.
“Not yet but…” Cat began.
“Bla, bla, bla – just get an alkaline one already!” Ashley said, cutting the tall girl short.
“It’s not that simple, it’s only from Mr. D’s garden.”
“Ooh, I thought it was from Planet Pluto.”
“Pluto’s not a planet!” Cat said defensively but Ashley wasn’t paying attention. Well, not to her group.

Drilling her carefully shaped nails on the table-top, Ashley almost fell off her chair in shock: the litmus paper was green! “Alkaline, it’s alkaline!” she almost shouted. This time, it was her group’s turn to be asleep.
Fancy that, the nerds bored of science! The girl shrugged as she poured the alkaline soil in with the acidic soil, spilling them both on Cat. Tapping her foot impatiently as she waited for an effect, the girl didn’t recall what happened next…

Crimson dust spiralled around her: it was almost as if she was in a tornado. The red powder soon faded into a lighter shade as it doubled in size. Confused, Ashley was oblivious to which direction she was headed but she could tell she was moving; she couldn’t help but gawk at the scene before her.

Landing on her back, Ashley felt the wind being knocked out of her. Dazed, she hastily got to her feet, dusting herself down. What had happened?  Where was she? As her mind cleared, questions buzzed in her brain. Inquisitive, she saw nothing around her except the same red, orange sand as in the whirlwind. The girl was evidently not in her cramped classroom and she seemed to be alone. Biting at her nails, which were now not so perfect, Ashley walked forward, her curiosity getting the better of her. The disturbingly quiet place was a lot to take in despite its nothingness. 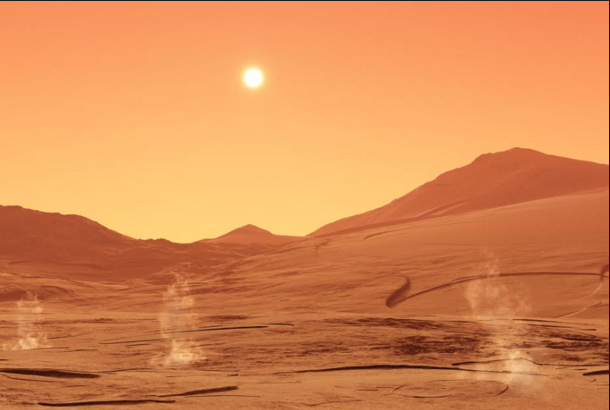 Out of the blue, a powder of dust erupted into the air as something hit the ground. Cautious, yet curious, the girl stepped back in two minds. The something that had landed coughed, unnerving the girl. As Ashley held her breath, the ‘thing’ moved to get up. Rising from the ground was a, a… it was Cat! Emotions hit Ashley. Shocked. Confused. Relieved. Annoyed. Annoyed. Why Cat, of all people why her? Then the memory of spilling the samples on her classmate hit her. It was probably best not to say…

Meanwhile, back in Mr. Daly’s classroom, the pupils sat in silence and Mr. Daly himself was shouting at a cupboard. “Ashley, come out! This isn’t a request – it’s an order,” but little did he know where she was.

“Where the flip are we?” Ashley half-asked, half-shouted. “How’m I supposed to know, Red-head,” came the reply. “What!!!” Ashley reached for her handbag but there was nothing strapped on her shoulder. The red sand had dyed her once blonde locks red: the diva’s biggest nightmare, after earwigs. “Anyway,” Cat started, a smile of satisfaction broad across her face, “I could take a wild guess and say we’re not in the classroom. Possibly on Mars.”

“Well, I suppose there’s no point just staying here,” and, as if that was a command, they began to walk.

“You know, we could be making scientific history and..” yet again Ashley had tuned out of Cat’s not-so-silent train of thoughts. In fact, Ashley would normally have left the girl behind but a) needed her scientific knowledge and b) just didn’t have the energy to argue. She needed water. A lot of it.
Almost like a radio, Ashley tuned back into Cat’s ramblings. “…famous. What do you think?”
“I’d love to be famous but science is boring!”
“You can talk – you spend your days looking at your nails.”
“And you spend yours looking at books!”
“You learn from books.”
“Learn enough to get us home?”
“I. I mean.” Cat turned a vibrant shade of red. “Look, find me some water and I’ll apologise.” The argument only escalated from there.

They walked and talked or rather walked and argued, when Cat saw something faintly in the distance. Although she was very much an indoors person, she ‘ran’ ahead. Ashley soon realised what her classmate had spotted and jogged to catch up.

Abruptly, they came to a stop. There, before them was a cubzeblight yet unknown to them, even Cat. “Wicked. It’s like a camel with solar panels!” exclaimed Cat as she stepped towards it for a closer look. Ashley didn’t reply but silently agreed. What happened next, though was a horrific scene: the cubzeblight had obviously mistaken Cat for a moneset and attacked. Limbs flew everywhere as if it was a cartoon but by the time the beast was done with Cat, she had no limbs. No limbs and no life. For the first time in her life, Ashley stopped thinking about her appearance. She was confused: her enemy was dead but she was sad.

Hatred bubbled inside her but this time not for Cat – for herself. She should have helped her classmate but was too cowardly to. After a moment of thinking, Ashley stepped towards the cubzeblight: she would die of thirst soon anyway…

‘Science Week’ a story by Iguana24

Dawn was breaking over the town of Southam as James Agoftos wandered his room excitedly… It was Science Week! The crisp air was becoming too much: it felt like a heatwave had hit. Wandering over to the steamed window, he caught a glimpse of something moving below; he ignored it.

On the other side of town, Lila Taylor was hoping the day to be over: she always hated Mondays. Lila got dressed and slowly walked over to her birch door, turning her heating off behind her; she soon saw something whizz past through the blur of her window.

Arriving at school, James gasped at all of the projects in satisfaction. As Lila arrived on the property, she gave a sigh as she found out that they were testing soil samples from ‘Mars’ a.k.a. Mr. Sullivan’s back garden. Sitting down with a smile, James was ready for the coming week, or so he thought… Suddenly, the lights went out and Lila gave a scream! Soon, the backup generators came on revealing something moving in the sample shared by Lila and James.

All of the soil started to float up and bunch together soon to swirl and create a portal. Many classroom objects disappeared into the vortex — including two children… Lila and James!

Cold was the night as Lila awoke from her slumber and began shaking James awake. Looking around, James realised that there were in some kind of vast, red desert… Mars 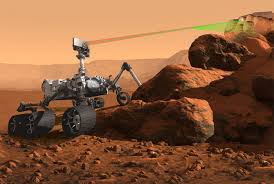 Starting to walk, Lila called out, “James! Follow me!”

Following Lily, James saw something quiver in the sand below so he leapt away as it started to swirl, engulfing Lila… James continued to walk; his legs felt like they could give way at any moment. Out of the rocky surface, a strange creature emerged: four wings; elephant legs; multiple sets of eyes.

James yelped and suddenly ran back to leap into the quicksand! He obviously had more chance of survival this way. Much to his surprise, he was alive and quite well: he was at the core… A whole civilisation had hidden there undiscovered for thousands of years: strange and magnificent beasts were everywhere… Then there was Lila…

For some reason, there was gravity, gravity at last. An oasis of water lay still in the middle with Spherisects flying everywhere and Monsoons swinging from vine to vine as the bioluminescent moss lit up the surrounding pools. Glavours were laying in holes dug into the wall. The beasts… the beasts were not attacking then? The Monsoons looked like monkeys with a wingsuit-like structure. As for the Spherisects, they were little red balls with no eyes but a good sense of smell and wriggly arms and legs with blue, bioluminescent bee-like wings lighting the sky. The Monsoons looked to be half a metre wide and one metre tall, and the Spherisects looked to be about 8 cm in height and just 5 cm wide. Wait until Mr. Sullivan hears about this!

Lila tripped into some green goo much like she had tripped into at the start when a rush of oxygen hit her; she had the answers for survival!…

But food… she hadn’t been hungry at all… Could her metabolism have slowed down? Could she survive? Could she tame a beast?… Would they ever get home to tell the tale?…